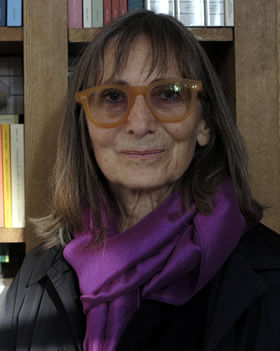 Norma Cole is a San Francisco based
writer, poet, and translator of French
authors like Danielle Collobert and
Jean Daive.

Norma Cole is a San Francisco based writer, poet, and translator of French authors like Danielle Collobert and Jean Daive. Her work is noted for its intelligence and deftness, and her books include Natural Light (2009), Spinoza in Her Youth (2002), The Vulgar Tongue (2000), and, most recently, Win These Posters and Other Unrelated Prizes Inside (2012).

Please introduce yourself… I understand you're from Toronto originally, and you now live in San Francisco, with stops in France along the way. Do you go back to France often?

Yes, I live in San Francisco, I've lived there for almost 35 years, and yes, I was born in Toronto. The first time I went to France was for the summer after my first year at the University of Toronto. I was a Francophile at birth, or at least when I first began learning to speak French, which was in middle school. Although Toronto is very much an Anglophone city, Canada is a bilingual country, so we start learning "the other language" at a young age. I thought I was French. After completing university, I went to France and lived for a few years in a village in the south, in the foothills of the Alpes-maritimes, near Nice. I go back, but usually to Paris now, whenever I have the chance.

What drew you to France and French literature?

I studied French and Italian as an undergrad at the University of Toronto, and then went on to do graduate work in French. As I said, I was engaged with the language and culture from an early age, and went from studying to being in the thick of it. As well as writing poetry, I translate contemporary French poetry, so I've gotten to know many poets who live there. Sometimes French poets even translate my poetry into French. In fact, when I was last there, in October 2013, I signed a contract for a book of mine to be published by Cortí. It will be bilingual: the French translation was done by Jean Daive and it's called AVIS DE FAITS ET DE MEFAITS. It's translated from my most recent book of poetry in English, WIN THESE POSTERS AND OTHER UNRELATED PRIZES INSIDE (published by Omnidawn in 2012) plus one earlier poem.

What are you working on now?

At this moment, I am working on a collaborative project that in 2014 will become a book called ACTUALITIES. The collaboration consists of my poems, with paintings and drawings by a wonderful painter, Marina Adams. It will be published by the exceptional Tracy Grinnel at Litmus Press.

What is your writing process? Do you do all your composition by longhand?

I usually keep a notebook at hand—the Clairfontaine notebook—and write in bits and pieces with a pen or pencil. Like sketching. When I feel ready, I type these fragments onto the computer, and order or reorder what's written, expanding or contracting, constructing, shaping, making . . .

What are your writing routines? Is there a certain place or time of day you like to write?

Any time of day or night. At times, I awake in the night and write something in the notebook, then look at it the next day and it's as though someone else wrote it. What one always needs is "more time." One seems never to have enough unscheduled time, time that turns into a feeling of timelessness, that does not require something immediate. Time becomes space. One creates space by reading, and then the stopping to think, and then the writing.

You've said you discovered Clairefontaine in Paris. Which notebooks do you use?

Are there writing supplies you're passionate about besides Clairefontaine?

I used to use an old-fashioned fountain pen with a nib, and black or blue ink from a bottle; or a cartridge pen (people perhaps don't know what that means any more), also with a nib and ink. The loveliest feeling of pen on paper. However, I had a stroke ten years ago, and had to switch to "the other hand," the non-dominant hand, my left hand. This type of pen doesn't flow the same way using the left hand, so I use a pencil or a ball point pen. And then my Mac.

Many of Norma's books can be found at SPD.