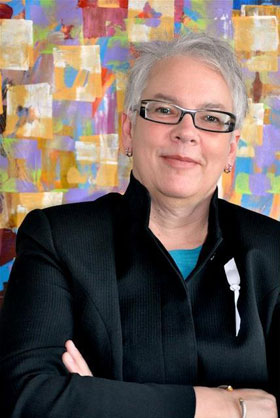 J.D. Eames is a Louisville, Kentucky based
playwright whose work has been
performed in San Francisco, San Diego,
Chicago, New York, and Alaska.

J.D. Eames is a Louisville, Kentucky based playwright whose work has been performed in San Francisco, San Diego, Chicago, New York, and even Alaska. Her latest project: a short online mockumentary about Mollie Murphy, Petophile Vigilante.

Please introduce yourself… I gather you’re from San Francisco originally, and now live in Louisville, Kentucky. How do you like it there?

Yes, I’m a 4th generation San Franciscan descended from horse thieves and political scoundrels. Though there is much I miss about California, the move was great timing—my partner and I moved here just as the latest economic crisis was developing. The cost of living here is softer. At the same time Louisville is a happening cultural arts town. It’s also full of birds, squirrels, chipmunks and trees. We live in an area that feels like we’re inside a park. I love that.

Can you tell us a bit about the course of your playwriting career? How did you get started, and how have your interests evolved in terms of topics and themes and forms?

Since I was a kid I’ve been writing stories. In high school I fell in love with theatre, but left it behind for more serious political and social concerns like sheltering homeless people and protesting the nuclear arms race. The only writing I allowed myself was a good leaflet or two and a lot of bad poetry.

Many years later there was a novel I was trying to write. One day I realized the story contained a ton of dialogue and realized, “Oh look, it’s a play.” It took seven years to write that first play because it took awhile to learn how to construct a decent one.

On some level all my plays are about how we connect with each other, and what choices we make when faced with simple or complex crises. On another level the plays reflect whatever I’m trying to understand, often been moved or confused by, whether it’s betrayal, suicide, or physical injuries people are confronted with. Right now I’m obsessed with politics and journalism. No doubt I’ll write a series of plays or stories out of the preponderance of material on those subjects.

I’ve been writing plays for over 15 years with occasional forays into other forms. In my heart I see myself as a storyteller and the form of the story does not have to be a play, although it often is.

Do you have any specific writing routines—a certain place or time of day, for example?

What I like to do is write in the morning and vary where I do that. Where could be at the library, a coffee shop, in the park, on the front porch, or in my office. For me, being wed to a specific routine can wither creativity. Shaking up where and when I write, even in little ways, is good for my creative subconscious. Consistency is not the same as routine, though, and I do write every day. Even when it looks like I’m not, I’m always writing.

You’ve said that you alternate between fountain pens and a Mac when you compose. Is there any particular scheme or logic to this, or do you just pick whichever method feels right in the moment?

First drafts are written by hand using a fountain pen. The Mac is used for subsequent drafts and editing and the pen is used less as it becomes less practical. Usually, that’s how it goes and is what I meant by alternating between pen and Mac.

When and how did you get into fountain pens? Do you have a favorite pen or ink, either generally or for specific purposes?

I’ve been using fountain pens for over four years. I was tired of putting disposable pens into the landfill. That’s true for most things in my life, not just pens. At first I became so enamored of fountain pens I acquired a lot of them. Now I have only a handful of pens, each one a favorite and selected to be of service to the Creative Muse. My first draft pens are an Edison Huron and a Danitrio urushi pen. My ink choices are kind of conservative: black, grey, brown and sometimes blue. My current favorite inks are Sailor Sky High, J. Herbin Perle Noire and Lie de Thé.

Tell us about your new production company, Guerrilla Da’Ville… when did you start it, and what are your plans going forward? Will we see more of Mollie Murphy in the future?

Guerrilla Da’Ville Productions coincided with the decision to make the Mollie Murphy short. Also in the back of my mind was that I might produce one of my own plays, too. I created the company in April 2010. Actual filming began in August of that year. I paid people in sandwiches, cookies and DVDs.

The most frequent question I’ve been asked by people outside of Kentucky has been, “Where did you find all those great actors?” I’m not sure if they’re surprised that great actors live in Louisville or that I would know any.

Mollie Murphy was a successful experiment for me: could I make a film? Would I enjoy it? It was also satisfying to have a project with a beginning, middle and an end point. In theatre so often we only see staged readings or workshops in lieu of productions and so I found the film very empowering and uplifting for my artist’s heart.

Whether more Mollie shorts come to life are dependent upon my finding the time as well as Liz Fentress being available and willing to play Mollie again. The door is open. We’ll see. There are a couple of other bigger film projects I’d like to tackle first. Even before that, however, I’m in the midst of a play that demands finishing. I believe that in answering the call to write story, whatever form it takes, keeps the channel open for more and more stories to come along and demand my attention.

Watch “Mollie Murphy, Petophile Vigilante” on Vimeo or on YouTube, or visit J.D.’s website for information about her other plays.