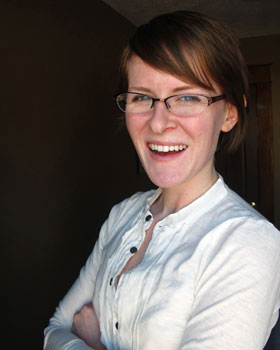 Cole Wardell graduated from Kenyon
College in 2010, where she earned a
degree in Creative Writing and received
several writing prizes.

Cole Wardell graduated from Kenyon College in 2010, where she earned a degree in Creative Writing and received several writing prizes. She now lives in Columbus, Ohio./p>

Please introduce yourself . . . where are you from originally, and where do you live and work?

My name is (Abby) Cole Wardell, but most people who met me through writing, pen geekery or the internet know me as Cole. I’ll let you know which one becomes my pen name.

In fourth grade, I wrote a novel. I can’t remember the title offhand, but it was an elaborate cross-continental story involving homeless kids, drugs, and Irish dancing. Don’t ask me to elaborate any more than that.

In my memory, the significant thing about that novel is that I was essentially investing all my social energy and desire into writing. When I began to have a real social life, my writing totally dropped off for several years. It wasn’t until high school that my writing began attracting attention and support from teachers, although I’ve often been told that my articulation skills would lead me to law school, not a typewriter.

Somewhere along the way I gathered a strong believe that, more than any other discipline, literature and storytelling are the broadest, most “truthful” methods for interpreting the world. Most professions have filters on: economists often see a world that is driven by money; natural scientists see a world governed by natural systems and as-yet-unsolved puzzles; social workers see only the gritty situations of reality that they are forced to work with every day.

But writers don’t have professional blinders on—or at least, they don’t have to have blinders on, though many do. Writers see the hideous grit and injustice of reality: the things that economists and scientists can ignore because it’s either explainable or irrelevant. And yet  simultaneously, writers aren’t bound by the rules of reality, and this allows them to explore and create beauty and meaning which may not actually exist. Writers can be politicians and economists, but they can also be pastors and therapists and philosophers.

I understand you’re currently working on a novella in a wirebound Rhodia pad… can you tell us a little more about that project? Do you do all your creative writing in longhand? Do you have any specific writing routines—a certain place or time of day, for example?

I’m working on an extension of my senior thesis at Kenyon, which was a creative nonfiction piece. In a nutshell, it’s about rurality, topography, mountain ranges, history, political identity and farming. And ghosts. –Is that a good teaser?

…I wish my life was stable enough to have a writing routine! I like the wirebound Rhodia pad because it’s just so big. It gives me the feeling of a blank canvas, and for me that makes it easier to create with a clear mind. If I tried to write a novel in a regular-size moleskine, I think I’d drive myself crazy.

I don’t always write longhand, though, especially with prose writing. Prose writing often requires getting caught up in a fast-paced rhythm and if I were to try to write it longhand, I would lose the pace and the thought.

However, when it comes to poetry, I almost always write longhand. Writing poetry is more carefully meditated, and the feeling of pen and paper enhances that.

What are your goals as a writer, and what are you doing to reach them?

Ah, this is a good question for my own benefit. Too often I get caught up in daily survival and forget to ask myself this sort of thing.

My goals as a writer are… to be a writer! To actually pursue the beliefs that I outlined in my first answer: that writing can reveal truths and offer new truths. I say this as a foremost goal because I often suffer from a political or social pessimism that threatens my art and writing. In this economy and at this point in history, sometimes it feels like you have to either go corporate or become a professor if you want to write. But of course, that kind of thinking often makes a self-fulfilling prophecy.

Right now I’m building a website which will contain both my visual and writing portfolios, which will help solidify these goals, I think.

You are also a visual artist—can you tell us a little more about what sort of media you work with these days? How do you balance your time between writing and making art?

I think I’m officially tied to watercolor these days. It must be fate—my great great uncle Henry Bacon was a watercolor artist.

Right now all my art supplies are still packed up in boxes from a recent move, so I’ve been doing little watercolor studies in a Clairefontaine watercolor pad, planning for future paintings.

Do you have any advice for other aspiring creative types?

Yes! Don’t mistake blog browsing for inspiration. Too often it merely wastes time and leads to imitation of other artists. I like this article from designer Sharon McMullen where she talks about exactly that. I still have to remind myself that the best professional development is not to discover new artists but to make myself a better one.

My other recommendation is to read The Gift, by Lewis Hyde. A necessity for anybody who feels the need to create, and the tension between art and a paycheck.